RAVEN: The Medicine of Magic 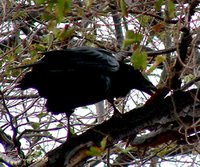 
Raven appeared to me the other day as I carried my groceries from the car. He flew over my head and noisily landed in the largest elm tree of my neighbor’s yard. I took note and continued on toward my casita — giving him a last look at my door for the great ruckus he put up. Something instinctively reminded me to not ignore this occasion, so I put my bag of groceries down in a chair by the door and went back out to see what this great black avian visitor was up to.

In the elm tree sat the largest raven I have ever seen, and there are a lot of ravens in this town to compare with. He was alone, sitting on a main branch and squawking up a storm with that deep sonorous signature voice. Judging by the size of the tree and branch this raven was well over two feet long and stood about two feet tall — this was a male specimen.

After I greeted him, I moved around to try to see him from a better angle. That’s when he began to change his vocalizations, ranging from ‘mrrroww’ to ‘arc', mimicking a cat and a dog. By this time I was thoroughly amused and enchanted by the magic of this meeting. That’s when he began laughing ‘hahahah’ and jumping around on the branch.

Sanity reappeared shortly after I too began laughing aloud with it — and then, telling Raven to not go away I’d be right back, I quickly ran to get my camera. Fortunately when I came back out he was still there, so I started shooting pics, They were difficult to get due to many smaller branches camouflaging the foreground and a few other obstacles in the way. So I made the settings on the camera as best I could and followed him from different angles. During this time, I spotted a neighborhood cat switching its tail as it walked across the street away from the raven — ha! — must have been flushed out.

According to Bernd Heinrich, ravens have a “greater variety of calls than perhaps any other animal in the world except human beings.” Candace Savage in “Bird Brains” writes, “A raven that heard repeated explosions being set off by a highway crew is reported afterwards to have shouted out, ‘Three, two, one, kaboom!’”

There are numerous stories of ravens being associated with various gods of different cultures, always with the respect for the sacred power that Raven carries between the spiritual realms and the physical world.

By now, and between vocalizations, this Raven was delicately nipping off the drying Fall leaves that were still attached to the tree, deliberately turning its head to drop them to the ground. He did this repeatedly, and then also began to dislodge parts of dead wood on the tree, and dropping that too! Although I could not see the ground behind the neighbor’s adobe wall, I certainly heard the sound when the piece hit the ground.

He continued to practice various other vocalizations like croaking, and puffing up his plumage as he hopped to different parts of the tree for about ten minutes before finally taking off in a westerly direction.

As I took pics I was attempting to really capture the iridescent coloring on its blue-black feathers that are symbolic of its shape-shifting powers; the blue-black only the background for the light to reveal pink and silver.

Raven medicine is Magic, Magic from the deep realms of the Great Mystery that is home to all that is Unknown. Some call it the Void, the place that seems to have No Form, out of which manifests All That Comes To Be, a place that to me represents the Great Creative Feminine, a force that holds the balance to the over-developed, distorted and consequently not-so-Divine Masculine in today’s time. Regardless of gender, all humans contain some of both; it is up to each of us to develop and balance the two.

According to Jamie Sams in ‘Medicine Cards’ when Raven appears “you are about to experience a change in consciousness.” Presently there are things in my life that could be the avenues powerful enough to shift the whole planet — as I am sure this is the same for everyone who is paying any kind of attention.

Raven has a role in many myths and cultures, such as in the Native culture of the Pacific NorthWest where it is told how Raven stole the light from the one who would have kept the world in darkness, and thereby brought life and order. Raven teaches us how to go into the Darkness and bring forth Light, one thing that most fear to do until one has been there and back, at least a few times. The Darkness/Void, etc. is the Feminine aspect; the manifested light is the corresponding Masculine creation from out of the womb of the Great Divine Feminine.

I suspect that Raven is a TimeTraveler, a symbol of the planet Saturn and the astrological sign of Capricorn. Raven is dark, and when viewed with fear will reflect that fear back to the viewer. The Magic of Raven is when with great respect, the viewer can look into the Creative Darkness and manifest Light.