ALL KINDS OF MOTHERS 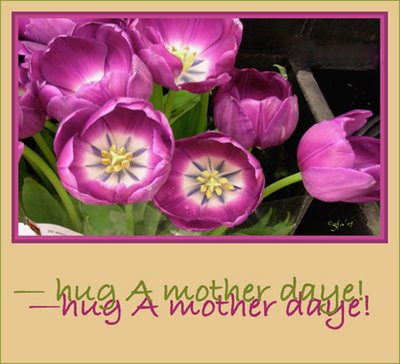 GemFireAir
All Kinds of Mothers
May 8, 2009
©marty kleva


The word ‘Mother’ is such an emotionally complex word — used with great passion in both the sacred & profane worlds.

We spend more intimate time with our mother before our birth than at any other time in our life, and within the context of that mother-child relationship, the experience of our birth is an extremely traumatic event. Being ripped from the warm, watery, safe environment of Mother’s womb sets up a love-hate relationship between mother and child that may or may not ever be brought to consciousness.

We could spend our entire lifetime exploring the vagaries of our mother-child relationship and not cover the entire field of the emotional hurts and joys. It may be true that we are more likely to forgive others of any disappointments, betrayals, and wounds than we are likely to even consider forgiving our mother. Of course, this may not be how it appears, for on the surface of things we may be very kind and loving toward Mother, while beneath it all we may suppress feelings of anger, and secretly blame her for all our disappointments.

In the context of the collective subconscious our attitude is reflected in the manner in which the word Mother is used to preface one of the most universally insulting profanities known to all.

Usage for ‘Mother’ in the world oscillates between exalting her upon the highest and wisest of the Virginal pedestals to debasing her beneath the lowest rock of sexual occupations. This evidence highly suggests that we have not progressed far in uncovering the depth of the deepest wounding and trauma that occurred during our original birth.

If there is such thing as a god(s), one(s) that we have not made up to make ourselves feel good, then he/they must be having a grand time watching this drama that keeps rotating between the poles of Love and Hatred, eternally linked between our anger and our guilt.

We use the expressions 'Necessity Is The Mother Of Invention', and being 'Tied To Mother’s Apron Strings', and refer to 'The Mother Of All Bombs', and the 'Mother of All Battles'.

We alternately elevate and denigrate Mother with the Divine Mother and the Great Devouring Mother, the Great Feminine Mother and the symbolic Dark Mother, Mother Jones and the MOTHER-OF-GOD. The last reference is a hidden and discreet allusion to the existence of a Mother before the existence of God, something that is highly non-regarded in present paternalistic world civilizations.

Then there’s always Your Mother, My Mother, Our Mother, Earth Mother, and Mother Nature.

Ah, such a wide spectrum of a playing field for us mothers to live and participate in.


Hugs to all you mothers,